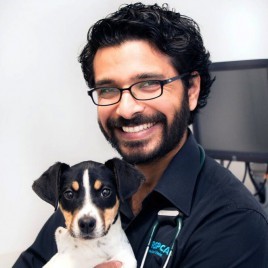 Guy Weerasinghe graduated in 2011 and is currently based on Queensland’s Sunshine Coast. His major interests are in zoonoses, disease surveillance, science communication and mentoring the next generation of veterinarians.

Guy is a Director of VeterinaryCareers.com.au – an employment group for veterinarians who are looking outside of traditional clinical practice. Guy is studying for a Masters of Veterinary Public Health while undertaking veterinary public health consultancies. For the past 3 years, he has been the President of the Australian Veterinarians in Public Health (a Special Interest Group within the Australian Veterinary Association) and he is now collaborating on a position statement on Climate Change for the AVA. He is also a veterinary spokesperson for the Climate Council.

Guy is currently a general practitioner at Greencross Caloundra where he applies his passions to help his clients. He had a memorable 6 month locum stint as the District Veterinarian with the Greater Sydney Local Land Services (part of NSW Trade and Investment) where he undertook duties in regulatory compliance, animal health and welfare, disease response, surveillance and control. Prior to this role, Guy spent 2 years as a shelter/GP veterinarian with RSPCA NSW, helped rewrite their zoonoses and biosecurity policies and assisted with a number of media. He has also undertook small animal locums around Sydney. His first position after graduation was in New Zealand in dairy practice with Rural Service Centre, Takaka, NZ. He is proud to have graduated from the University of Queensland’s School of Veterinary Science and appreciates the support and encouragement from the Faculty and staff whilst studying there.